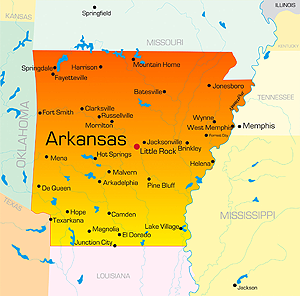 Vehicles that are converted to an alternative Fuel must be reported to the Arkansas Department of Finance within 10 days of the conversion or be subject to a penalty.

The Arkansas Energy Office, a division of the Arkansas Economic Development Commission, administers the Arkansas Gaseous Fuels Vehicle Rebate Program (Program), funded by the Clean-Burning Motor Fuel Development Fund. The Program provides 50% of the conversion or incremental cost, up to $4,500, specifically for compressed natural gas (CNG), liquefied natural gas (LNG), or liquefied petroleum gas (propane) vehicle purchases or conversions. CNG must be delivered to a vehicle at 3,000 pounds per square inch and metered on a gasoline gallon equivalent (GGE) or diesel gallon equivalent (DGE) basis. One GGE of CNG is equal to 5.66 pounds (lbs.) and one DGE of LNG is equal to 6.22 lbs. The Arkansas Energy Office reviews and processes vehicle rebate applications on a first-come, first-served basis. Rebates are also available for CNG, LNG, and propane fueling stations in the amount of 75% of qualifying costs, up to $400,000. The Program is currently closed and no funding is available (verified July 2015). (Reference Arkansas Code 15-10-901 to 15-10-904 and 19-5-1249)

LNG and propane (liquefied petroleum gas or LPG) used as motor fuel are taxed on a per vehicle basis through an annual flat fee special fuel user's permit. The fee is based on the vehicle's gross vehicle weight rating. For each vehicle fueled by LNG or propane, the vehicle owner must apply for and obtain a liquefied gas special fuel user's permit from the Arkansas Department of Finance and Administration. (Reference Arkansas Code 26-56-301 and 26-56-304)

Any individual or company who converts a vehicle to operate on an alternative fuel must report the conversion to the Arkansas Department of Finance and Administration within 10 days of the conversion. An owner or operator who fails to report such a conversion may be subject to a penalty. (Reference Arkansas Code 19-6-301, 26-56-502, 26-56-601,Arkansas Code 26-62-214)

Individuals who use natural gas for residential or other tax-free purposes may not use natural gas in motor vehicles unless the natural gas is removed through a separate meter installed by the alternative fuels supplier for such purposes. (Reference Arkansas Code 26-62-203)

Rebate. Amends the Arkansas Alternative Fuels Development Program to expand the vehicle incentives to all types of motor vehicles, dedicated and bi-fuel natural gas and propane vehicles as well as conversions. Current program only encourages natural gas school bus conversions. Under this program, the Arkansas Agriculture Dept. will administer a rebate program to pay for the incremental cost of natural gas and propane vehicles. This will be effective after July 1, 2013. The rebate amount is worth 75% of the incremental cost or conversion cost, and no entity may receive more than $50,000 per year in rebates. Reference - SB-125 Bill History, Reference - SB-125 Bill Text Enacted 2/26/2013; Act No. 152

Rebate. Amends the Arkansas Alternative Fuels Development Program to expand the vehicle incentives to all types of motor vehicles, dedicated and bi-fuel natural gas and propane vehicles but it appears to be limited to conversions. Current program is limited to natural gas school bus conversions. This will be effective after July 1, 2013. All types of entities may apply for rebate, which is worth 50% of the incremental cost or conversion cost: maximum credit of $5,000 for vehicles with GVWR of 8,500 or less; $8,000 for 8,501 - 14,000 GVWR vehicles; $32,000 for vehicles above 26,000 GVWR. No entity may receive more than $75,000 per year in rebates. Like before, the bill leaves out vehicles from 14,001 - 25,999 lbs.Reference - SB-185 Bill History, Reference - SB-185 Bill Text Engrossed 2/27/2013; major difference here is that this bill does NOT include propane unlike SB 125

Loan program. Creates a new loan program for natural gas school buses; includes conversion cost and incremental purchase costs of vehicles, and cost of fueling infrastructure. Loans must be repaid over a 12 year period and the loan rate is 0 percent. The program includes a forgiveness clause that forgives up to 50% of the cost of vehicles or 75% of the cost of fueling infrastructure. School districts participating in the program earn forgiveness at a rate of 1/12 of 50% or 1/12 of 75% for each year they are in the loan program. Reference - HB1834 Bill History, Reference - HB1834 Bill Text Engrossed 3/25/2013

Arkansas Clean -Burning Motor Fuel Development Act. Vehicle rebates for OEM and converted CNG and LNG vehicles; rebate for vehicles is lesser of 50% of cost of qualified equipment or $4,500. Fueling station rebate worth lesser of 75% of the cost or $400,000; home fueling equipment rebate is lesser of 50% or $2,500. Must apply for the rebates. In order to qualify for the credits the stations must dispense CNG in GGE units defined as 126.67 cubic feet or 5.66 pounds, and LNG in DGE units defined as 6.22 pounds of natural gas. The vehicle rebate requires installation by a certified mechanic even for OEM vehicles. Also note that the GGE and DGE do not actually require this in all cases or use this for taxation purposes; appears to only relate to the rebate program. Reference - SB792 Bill History, Reference - SB792 Bill Text Signed by the Governor 3/28/2013; Act 532

Amends the Arkansas Alternative Fuels Development Program which is essentially a rebate program to include a tax credit for alternative fuel production. The production credits are worth $0.10 per gallon of alternative fuel produced. The legislative impact statement accompanying this bill says that it does include compressed natural gas but does not say LNG is included. Reference - SB933 Bill History, Reference - SB933 Bill Text 3/13/2013 Engrossed.

Establishes a Natural Gas School Bus Pilot Program. It is a one year program to place NG buses in four public school districts. The bill says schools will receive grant for the purchase of 10 CNG buses; they also must agree to purchase 10 additional CNG buses. Also amends the current loan program for local school districts to increase the amount from $500,000 to $1,500,000 for the purchase, operation and maintenance of CNG school buses. Reference - SB1146 Bill History, Reference - SB1146 Bill Text Passed Senate 4/2/2013 Signed by Governor 41/12/2013; Act No. 1195[printfriendly]