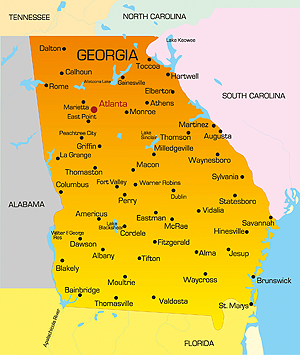 The state has licensing and registration requirements for alternative fuel distributors, and specifically CNG. Georgia requires the purchase of a special license plate for natural gas vehicles at $60 for issue, and renewal at $35 per year.
Vehicles

Beginning July 1, 2015, an income tax credit is available to taxpayers who purchase new commercial medium-duty or heavy-duty AFVs that operate using at least 90% alternative fuel. Eligible alternative fuels include electricity, propane, natural gas, or hydrogen fuel. Medium-duty hybrid electric vehicles also qualify. Eligible medium-duty AFVs with a gross vehicle weight rating (GVWR) between 8,500 and 26,001 pounds (lbs.) may qualify for a credit of up to $12,000. Heavy-duty AFVs with a GVWR over 26,001 lbs. may qualify for a credit of up to $20,000. The maximum credit per taxpayer is $250,000 and no unused portion of the credit may be carried forward. Qualified AFVs must be purchased before June 30, 2017, remain registered in Georgia for at least five years, be certified by the Georgia Board of Natural Resources, and accumulate at least 75% of their annual mileage in Georgia. The Georgia Department of Revenue will pre-approve credit applications on a first come, first served basis. Up to $2.5 million in total credits will be available each fiscal year. (Reference Reference - HB348 Bill History, Reference - HB348 Bill Text, and Georgia Code 48-7-29.18 and 48-7-29.19)

Distributors who sell or use motor fuel, including special fuels, are subject to an excise tax of $0.075 per gallon. Motor fuels that are not commonly sold or measured by the gallon and are used in motor vehicles on public highways are taxed according to their gasoline gallon equivalent. Propane and special fuels sold in bulk to a licensed consumer distributor are exempt from this tax. (Reference Georgia Code 48-9-3)

Anyone dispensing CNG for use in vehicles must obtain a permit from the Georgia Safety Fire Commissioner. Individuals or businesses must pay a one-time fee of $100. (Reference Georgia Code 25-2-4.1)

Amends various fees and fuel taxes. Amends the special license plate provision so that only electricity, propane and natural gas are defined as alternative fuels. Also imposes a new registration fee on these alternative fuel vehicles: $200 for non-commercial vehicles, $300 commercial vehicles. Removes current authority for local sales and use taxes on motor fuels but authorizes new tax of up to 3 cents if approved by referendum by affected voters. Amends motor fuel tax exemption for non-road vehicles that operate on fuels other than gasoline. Replaces the current motor fuel tax with new tax of 29.2 cents for gasoline and 33 cents for diesel fuel. Rates for taxes will increase in future with construction costs and improvements in fuel efficiency. CNG and LNG appear to be taxes liked gasoline under this proposal. Amended to clarify new registration fee does not apply to CNG, LNG or LPG vehicles. 3/18/15 amendment changes tax increase to 24 cent for all fuels. Latest version imposes tax of 26 cent on motor fuels other than diesel fuel and 29 cent on diesel fuel. Repeals tax credit for light duty low-emission and zero emission vehicles also effective July 1, 2015. Bill is effective 7/1/2015. Reference - HB170 Bill History, Reference - HB170 Bill Text Representative Roberts; conference agreement adopted by House and Senate 3/31/15; signed by governor 5/4/15

Modifies the tax credit for businesses that install charging equipment for electric vehicles so that the amount is up to 20 percent (not 10 percent) until June 30, 2018, after which time it reverts back to 10 percent. Limit of $2,500 remains in place. Amended 3/2/15 to include natural gas refueling as well. Limits annual credits to $750K and $150K for any business. Effective July 1, 2015 Reference - HB200 Bill History, Reference - HB200 Bill Text

Amends the state motor vehicle license plate requirements to require a special license plate for alternative fuel vehicles and hybrid electric vehicles that are to be exempted from HOV lanes or restricted lanes. Not clear whether AFVs must be dedicated - does not say solely powered by alternative fuel. Reference - HB180 Bill History, Reference - HB180 Bill Text 2014-02-20 - House Committee Favorably Reported By Substitute

Provides tax credits for purchase of alternative fuel vehicles including natural gas vehicles. Credits depend on size of vehicles as follows: light duty less than 6,000 GVWR or less, $2,500, medium duty vehicle 6,001 - 26,001 GVWR, $12,000, and heavy duty vehicle 26,001 or more GVWR, $20,000. Only dedicated vehicles qualify or for HDVs a vehicle powered by at least 90% alternative fuel. Tax credits are on first come basis and limited to $10 million per year. Allocation of credits is 70% of heavy-duty vehicles, and 30% to medium and light duty. The bill refers to commercial motor vehicles so it is not certain the individual consumers would qualify for tax credits. Credits are available for vehicles acquired on or after July 1, 2014 and before June 30, 2018. Reference - HB348 Bill History, Reference - HB348 Bill Text 2014-03-26 - House Sent to Governor