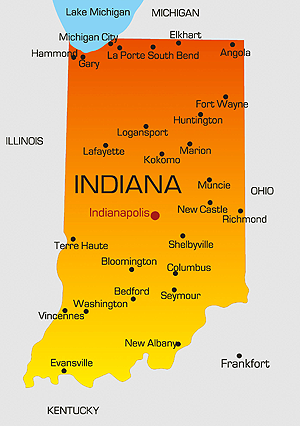 Indiana has a decal registration-only requirement for AFVs.

The state has a requirement that all state agencies seek to acquire AFVs or convert existing vehicles to an alternative fuel.

**Indiana has a decal registration-only requirement for AFVs.

Citizens Gas & Coke Utility (Citizens) offers rebates for qualified compressed natural gas (CNG) vehicle conversions or for the purchase of an original equipment manufacturer dedicated or bi-fuel CNG vehicle. Used NGVs may also qualify. Rebates are available to fleet operators on a case-by-case basis. Citizens will examine each project on the merits of providing the rebate based on hours of operation or miles driven, per vehicle, per year.

Effective January 1, 2014, certain special fuels sold or used to propel motor vehicles are subject to a license tax. Liquefied natural gas is subject to a tax of $0.16 per diesel gallon equivalent. Compressed natural gas, butane, and propane are subject to a tax of $0.16 per gasoline gallon equivalent. The tax does not apply to biodiesel blends of at least 20% (B20); special fuel used only for a personal, noncommercial use and not for resale; or biodiesel used by a biodiesel producer holding an exemption certificate. Other exemptions apply. (Reference House Bill 1324, 2013, and Indiana Code 6-6-2.5)

Effective January 1, 2014, a person who operates a commercial motor vehicle on any highway in Indiana is subject to a tax on the consumption of motor fuel. The tax rate is $0.16 per diesel gallon equivalent for liquefied natural gas and $0.16 per gasoline gallon equivalent for compressed natural gas, butane, or propane. (Reference House Bill 1324, 2013, and Indiana Code 6-6-2.5) and Indiana Code 6-6-4.1-1)

Special fuel is defined as all combustible gases and liquids that are suitable for powering an internal combustion engine or motor or are used exclusively for heating, industrial, or farm purposes. Special fuels include biodiesel, blended biodiesel, and other alternative fuels.

Makes corrections to various statutes including the tax credits for alternative fuel vehicles and infrastructure. The changes do not appear to be significant. Although
note that previous definition and one still included is limited to compressed natural gas. Reference - SB199 Bill History, Reference - SB199 Bill Text Passed Senate 1/22/2015; passed House 3/10/2015; Enrolled 2015-05-04 - Public Law 109

Amends motor fuel tax so that current gross receipts tax does NOT apply to special fuel and instead imposes large surcharge (14 cents instead of 11 cents) on special fuel which includes diesel fuel, LNG and CNG. LNG rate is per DGE and CNG is per DGE. With this change the total tax on commercial carriers in IN would be 30 cents instead of 27 cents. Reference - SB488 Bill History, Reference - SB488 Bill Text Status: 25% progression, died in chamber

Clarifies that the temporary imposition of the sales tax only applies to natural gas and not all alternative fuels. This sales tax applies to persons who use a motor vehicle to provide public transportation of persons or property. Further clarifies that the sales tax does not apply to public transportation corporations. This is the pay for provision for the incentives adopted in Indiana in 2013. Reference - HB1448 Bill History, Reference - HB1448 Bill Text Enacted 6/20/2014

Makes changes to administration of the tax credit for natural gas powered vehicles (vehicles now must be purchased or leased from IN dealer). Other changes include limiting the revenues for NGV tax credits to gross retail and use taxes imposed on CNG and LNG. The filing requirements for motor carriers to receive the 12% credit against road taxes paid must be filed quarterly; this credit only applies to CNG. Not sure why LNG no also included in this provision. Removes antiquated restriction on operating compressed gas vehicles outside of city limits after dark. Reference - HB-1180 Bill History, Reference - HB-1180 Bill Text Signed by Governor 3/27/2014; PL No. 212.

Relates to office of energy development; establishes the state Office of Energy Development within the Office of the Governor; provides that the director of the office is the chief energy officer of the state; provides that the office administers: the alternative fuel fueling station grant program; the alternative fuel vehicle grant program for local units; homes energy assistance and weatherization programs; the energy development Reference - SB529 Bill History, Reference - SB529 Bill Text Signed by Governor 4/8/2013

Amends the state motor fuel excise taxes as of July 1, 2013. Repeals the decal tax as of July 1,2013; for utilities the repeal data is 3/31/2014. This bill would adjust the excise taxes so that all alternative fuels are taxed on a gasoline gallon equivalent basis and it appears for the first time would subject alternative fuels to the 7% sales tax already in place for gasoline and diesel fuel that is applied in addition to the state motor fuel excise tax (7% is applied on cost of fuel less other taxes like federal & state tax). Also requires that price be posted in GGE units but provides exception if pumps are "for trucks only." This trucks only provision would appear to allow LNG to be sold in units other than GGE but tax would still be applied on GGE units of LNG. The excise tax rate on alternative fuels would be $0.18 per GGE; the gasoline tax in IN is $0.18. Reference - SB613 Bill History, Reference - SB613 Bill Text

This state was last examined and updated in October, 2016.