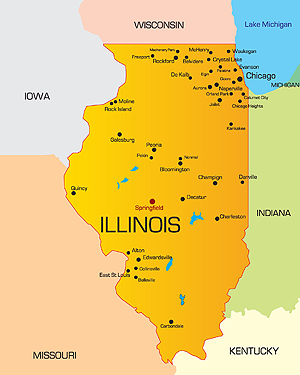 Illinois alternative fuel focus is primarily on ethanol and biodiesel, but they have made allowances for natural gas in most of the provisions passed in the legislature.

CNG vehicles must display a decal.

As part of its Green Fleets Program, the state offers rebates of up to 80% ($4000) for the cost of purchasing or converting a vehicle that runs on alternative fuels including natural gas. The program also offers marketing and support for fleets in the state.

The state passed a law that allows for reimbursement to school districts that convert school busses to an alternative fuel.

State fleet conversion methods have focused primarily on HEVs, with a caveat for medium and heavy duty vehicles to adopt "alternative fuel use". The state pased the Green Governments Illinois Act to encourage and empower municipalities within the state to adopt green methods and that includes AFVs.

IFTA - IFTA taxes are applied to vehicles of 3+ axles, or weighing more than 26,000 pounds. IFTA tax tables can be found here
Incentives

The Illinois Alternate Fuels Rebate Program (Program) provides a rebate for 80% of the incremental cost of purchasing an AFV (up to $4,000), 80% of the cost of converting a conventional vehicle or a hybrid electric vehicle to an AFV using a federally certified conversion (up to $4,000), and for the incremental cost of purchasing alternative fuels. Eligible fuels for the program include E85, fuel blends containing at least 20% biodiesel (B20), natural gas, propane, electricity, and hydrogen. A vehicle may receive one rebate in its lifetime. Only AFVs or conversion systems purchased from an Illinois-based company or vendor are eligible, except if the vehicle is a heavy-duty specialty vehicle that is not sold in Illinois, and only hybrid electric vehicles fueled with alternative fuels are eligible. To be eligible for a fuel rebate, the entity or individual must purchase the majority of E85 or biodiesel fuel from Illinois retail stations or fuel suppliers. The E85 fuel rebate is up to $450 per year (depending on vehicle miles traveled) for up to three years for each flexible fuel vehicle that uses E85 at least half the time. The biodiesel fuel rebate (for B20 and higher blends) is for 80% of the incremental cost of the biodiesel fuel, as compared to conventional diesel. The Program is part of the Illinois Green Fleets Program and is open to all Illinois residents, businesses, government units (except federal government), and organizations located in Illinois. (Reference House Bill 6047, 2010, and 415 Illinois Compiled Statutes 120/30)

A vehicle powered by natural gas or propane may exceed the state's gross, axle, and bridge vehicle weight limits by up to 2,000 pounds. This exemption does not apply on interstate highways. (Reference 25 Illinois Compiled Statutes 5/15-111)

The Illinois Green Fleets Program recognizes and provides additional marketing opportunities for fleets in Illinois that have a significant number of AFVs and use clean, domestically produced fuels.

The Illinois Department of Education will reimburse any qualifying school district for the cost of converting gasoline buses to more fuel-efficient engines or to engines using alternative fuels. Restrictions may apply. (Reference 105 Illinois Compiled Statutes 5/29-5)

An entity that owns, controls, operates, or manages a facility that supplies electricity to the public exclusively to charge battery electric and plug-in hybrid electric vehicles or compressed natural gas to fuel natural gas vehicles is not defined as a public utility. (Reference House Bill 5071, 2012 ; 220 Illinois Compiled Statutes 5/3-105; and 20 Illinois Compiled Statutes 627/10)

To help achieve the statewide goal of reducing petroleum use by 20% by July 1, 2012, as compared to 2008 petroleum use, Illinois state agencies must work towards meeting the following goals:

Agencies that operate medium- and heavy-duty vehicles must implement strategies to reduce fuel consumption through diesel emission control devices, HEV and EVs technologies, alternative fuel use, and fuel-efficient technologies. Agencies must also implement strategies to promote the use of biofuels in state vehicles; reduce the environmental impacts of employee travel; and encourage employees to adopt alternative travel methods, such as carpooling. (Reference Executive Order 11, 2009)

The Green Governments Illinois Act (Act) demonstrates the state's commitment to reduce negative environmental impacts, reduce greenhouse gases, and preserve resources for current and future generations. The Act also aims to strengthen the capacity of local governments and educational institutions to enable a more environmentally sustainable future. The Act established the Green Governments Coordinating Council (Council) to fully integrate cost-effective environmental sustainability measures into the ongoing management systems, long-range planning, and daily operations of state agencies. Initially, the Council will focus on initiatives that include those related to energy efficiency, renewable energy, and alternative fuel vehicles. Local governments and educational institutes are not required to participate in the provisions of the Act. (Reference 20 Illinois Compiled Statutes 3954/1 to 3954/45)

Authorizes the Regional Transportation Authority to borrow money for certain purposes including converting the South Cook garage to a compressed natural gas facility. Reference - HB750 Bill History Reference - HB750 Bill Text Status: bill originally did not include this provision; passed House on 5/19/16; to Senate Committee on Assignments; passed Senate 5/26/16; to the governor 6/24/2016; signed by governor 7/29/16.

Amends the Procurement Code; requires that on and after January 1, 2016
, or as soon thereafter as possible, 25% of passenger vehicles, including dedicated or non-dedicated fuel type vehicles, purchased with State funds shall be vehicles fueled by the specified alternative fuels; provides that the Chief Procurement Officer, in consultation with the Director of Central Management Services, may determine certain State agency vehicle procurements that are exempt from this requirement, based on the specified. Reference - HB3667 Bill History, Reference - HB3667 Bill Text Status: passed out of Senate Cmte on State Government and Veterans Affairs; third reading ordered 5/19/15. Passed House and Senate as of 5/30/15

Amends motor fuel taxes so that LNG pays per diesel gallon equivalent (DGE) of 6.06 lbs. of LNG. LNG would be subject to the diesel tax which currently is 19 cents plus 2.5 cents or total of 21.5 cents. Amends tax law to exclude LNG from tax when used in ships, vessels or barges (diesel currently is exempted). Amends the weights and measure provisions in the state so that CNG is sold in GGE units (5.66 lbs.) and LNG is sold in DGE units of 6.06 lbs.Reference - SB3369 Bill History, Reference - SB3369 Bill Text Passed Senate 4/8/2014

Provides tax credit for heavy duty natural gas trucks (above 33,000 lbs.) of 50% of the incremental cost or no more than $18,000 per truck. Provides a refund of 12% of the motor fuel taxes imposed on CNG in the previous year. Also provides 2,000 pounds weight exemption for NG trucks.Reference - SB3574Bill History, Reference - SB3574 Bill Text Enacted 8/22/14

Amends (415 ILCS 120/35) the fees that current fund the states Alternative Fuel Fund. The fee would increase from $20 to $40 and is currently imposed on all types of fleets of 10or more vehicles. The exemption from fee currently applies to state owned or local government vehicles (but not federal vehicles) and also to electric vehicles; no change is proposed to the exemption. Reference - SB-1158 Bill History, Reference - SB-1158 Bill Text Postponed in committee 2/13/2013, 2013-04-19 - Rule 3-9(a) / Re-referred to Assignments

Amends the Procurement Code, the Highway Code, and the Toll Highway Act; provides that on and after January 1, 2016, 25% of all vehicles purchased with State funds shall be vehicles fueled by electricity, compressed natural gas, liquid petroleum gas, or liquid natural gas; provides that by January 1, 2016, the Department of Transportation shall construct and maintain at least one electric vehicle charging station at each rest area on State highways. Reference - HB2695 Bill History, Reference - HB2695 Bill Text Passed - 2013-08-16 - Public Act 98-0442