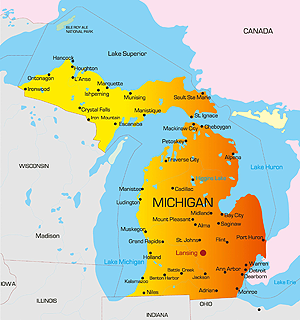 A tax exemption may apply to industrial property that is used for, among other purposes, high-technology activities or the creation or synthesis of biodiesel fuel. High-technology activities include those related to advanced vehicle technologies such as electric, hybrid electric, or alternative fuel vehicles and their components. To qualify for the tax exemption, an industrial facility must obtain an exemption certificate for the property from the Michigan State Tax Commission. (Reference Michigan Compiled Laws 207.552 and 207.803)

Dedicated AFVs powered by compressed natural gas, propane, electricity, or any other source as defined by the Michigan Department of Transportation are exempt from emissions inspection requirements. (Reference Michigan Compiled Laws 324.6311 and 324.6512)

Starting Jan. 1, 2017 authorizes a commercial user of CNG who fuels at a station or stations owned or leased by that commercial user and that are not open or available to the public, to pay the excise tax rate specified in section 152 on a diesel gallon equivalent basis. A DGE is set out as 6.38 lb. or 142.78 cubic feet of CNG. This would effectively equalize the tax rate for some commercial users so that CNG and LNG are taxed on a DGE basis. Legislation enacted last year imposes the LNG tax on a DGE of 6.06 pounds. Reference - HB5572 Bill History, Reference - HB5572 Bill Text Status: passed House 9/21/16; passed Senate 10/20/16; signed by governor 11/2/16

Amends motor fuel gasoline tax so that CNG pays on GGE basis (5.66 lbs. or 126.67 cu. ft.) and LNG pays diesel rate based on DGE of 6.06 lbs. Replaces current base tax of 19 cent on gasoline and 15 cent on diesel with a tax that is based on 7.5 percent of the wholesale price of these fuels to take effect April 1, 2015, and that is increased each year afterwards by 1% until maxing out at 13.5% in 2021. Note the bill enacted last year includes tax of 14.9 percent. Requires retailers to advertise price of fuel in gallon equivalent units. Reference - HB4317 Bill History, Reference - HB4317 Bill Text

This bill focuses exclusively on alternative fuel and incorporates the current DGE and GGE definitions for CNG and LNG as already enacted under Michigan law. However, it appears to clarify that unlike the other bills under consideration, that the excise tax for alternative fuels is tied to the gasoline tax and not the higher diesel or motor fuel tax. This needs to be confirmed. Reference - HB4337 Bill History, Reference - HB4337 Bill Text

Motor fuel tax. Imposes diesel rate on LNG per diesel gallon equivalent; diesel tax is 6% of wholesale price. CNG would pay the gasoline rate (6% gasoline wholesale price) but not sure what unit would be used; the only term used in the bills is DGE. This bill references sections of code enacted in January but not yet effective. Also indicates that it only takes effect if other bills are enacted (see HB 4615, 4616). Reference - HB4614 Bill History, Reference - HB4614 Bill Text Status: June 10 Reprint - references "gallon equivalent" and no longer singles out DGE. Also ties the 6% tax rate for alternative fuels to the price of those alternative fuels and not gasoline or diesel (unless average alternative fuel prices are not available). Effective date is Oct. 1, 2017. Signed by Governor 11/9/15

Motor fuel tax. Starting Oct. 1, 2015 would raise the diesel tax from 15 to 19 cent (gasoline already pays 19 cent). The state also imposes additional tax of 6% sales tax on gasoline and diesel. Provides that CNG, LNG, and most other alternative fuels are to be taxed like diesel fuel and based. CNG and LNG would pay per DGE using 6.380 lbs. or 6.06 lbs. as a DGE, respectively. The new tax on CNG and LNG would apply Oct. 1, 2015 for retailers, Jan. 1, 2016 for commercial users, and July 1, 2016 for all other users. The fuel tax would be adjusted each year for inflation or by 5% whichever is less but would not be lower than the rate in effect on Oct. 1, 2015. Residential users appear to be covered by the new tax but would have until July 1, 2016 to start complying; payments would be quarterly instead of monthly for non-commercial users. Reference - HB4615 Bill History, Reference - HB4615 Bill Text 6/10/15 subst. version replaces CNG DGE with GGE of 5.66 lb. or 126.67 cu. ft. for tax.

Amends motor fuel tax so that CNG pays gasoline base rate per GGE and LNG pays diesel base rate per DGE. Also includes CNG GGE of 5.66 lbs. or 126.67 cu. ft., and LNG DGE of 6.06 lbs. Increases fee charged for retailers from $50 to $500, and charges commercial users a fee of $50. Retailers and commercial users would have to fie taxes monthly, while other users would have to file quarterly. The requirements would go into effect for commercial users starting July 1, 2016 and for other users like residential users, would take effect Jan. 1, 2017. Reference - SB341 Bill History, Reference - SB341 Bill Text

Michigan has proposed no 2014 NGV legislation as of this update.